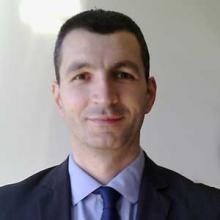 Lawyer since 19 february 2010, he mainly deals with Criminal Law, Immigration Law and Right of Muslim and Islamic countries, juvenile criminal law and issues relating to the protection of minors in general, as well as the issues of Privacy and Compliance ; his office has been structured according to specific expertise related to the main areas of law thanks to the cooperation with a wide network of professionals.

Doctorate in Comparative Law, with special focus on Islamic Law, at the University of Rome “Tor Vergata”. He is currently Contract Professor in “National and European regulations on immigration” at the University of Rome Tor Vergata, as well as member of the Strategic Committee of the university Center for Economic and Legal Research (CREG) and collaborates, as an independent expert, with several public and private centers.

From 2014 he has been entrusted as a special guardian for the procedural representation of minors in civil proceedings and as an expert in Muslim Law of Islamic Countries and Immigration Law.

Since 2011 he has been accredited in the board of public defenders at the Juvenile Court of Rome.

Author of numerous publications on the subject.

He completed his university degree at the Faculty of Law with a doctorate in Legal System in Roman Law and its Unification, focusing also Islamic law at the University of Rome “Tor Vergata”.

Subsequently, not only he continued his legal studies, publishing articles for magazines or specialized reviews, but also started the legal profession as a criminal defense lawyer, thus having the opportunity to deal with the cases of immigrants, asylum seekers and minors. In particular, he has supported foreigners in the renewal phase of the residence permit, the request of Italian citizenship and statelessness status, as well as in proceedings against the expulsions. He also has legally assisted asylum seekers in the framework of the application for international protection and children as well.

Finally he implemented several interventions as researcher or trainer abroad (Tunisia, Libya and Morocco) and especially in Italy, in the framework of his collaboration with the Study and Research Center IDOS.